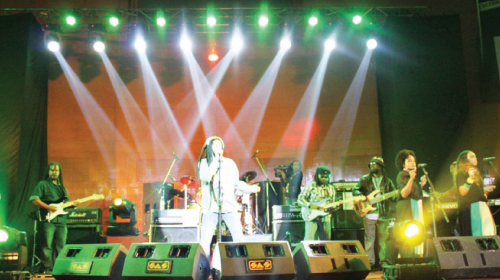 Julian Marley, the 37 year old reggae star, son of Bob Marley, performed some unforgettable numbers in a concert at the Hall of Fame, Bangabandhu International Conference Centre in Dhaka on January 4th. 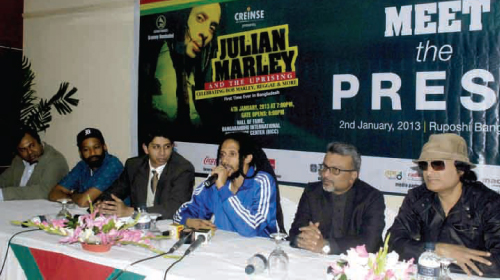 "Julian Marley, son of reggae legend Bob Marley, has been doing reggae music for quite a while. A devout Rastafarian like his father, Julian travels the world spreading messages of peace and equality through his music. He and his band, The Uprising, arrived in Dhaka on Wednesday to perform a concert in the capital"

News in The Daily Star: www.thedailystar.net/news

Born in London, Julian is the only son of Bob Marley to have been born and raised in the UK. He frequently visited his family and brothers, Ziggy, Stephen, Damian and Kymani in Jamaica. Growing up as a youth in a musical atmosphere Julian quickly adopted a musical lifestyle and at an early age became a skilful, self-taught musician mastering the bass, drums, guitar and keyboards. By the tender age of five, he had recorded his first demo at the Marley family home in Kingston, Jamaica.

Julian formed the band, The Uprising shortly after the murder of the influential Wailers drummer and wrote two unreleased songs, ‘Uprising’ and ‘What They Did Wrong’ in response to the incident.

Julian and The Uprising have performed worldwide with his brothers and on independent tour since the success of his album, ‘Awake’ in 2009. They have also contributed musical elements to singer Lauryn Hill’s Grammy-award winning album, ‘The Miseducation of Lauryn Hill’ including playing guitar on the single, ‘Forgive Them Father’. In 2003, Julian joined his siblings to contribute a version of the single, ‘Master Blaster’ for Stevie Wonder’s tribute album, ‘Conception: An Interpretation of Stevie Wonder Songs’.

He also performed on the invitation of the Jamaican Government, during the 2008 Olympic Games in Beijing, China and celebrated alongside Jamaica’s Gold medal winning runner, Usain Bolt. 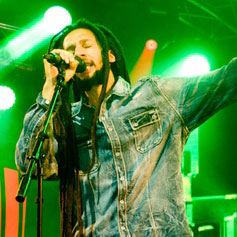 "In Colombo today is Julian Marley, son of reggae legend Bob Marley, a Grammy award nominated, roots-reggae musician, singer-songwriter and producer himself. In the same tradition as his father, Julian ‘JuJu’ Marley’s music is inspired by life and spirituality"